Artists and songwriters from across the EMI family are raising funds to help the Red Cross support people affected by last month’s earthquake and tsunami in Japan, through an incredible worldwide auction of personal items and memorabilia.

The charity auction, which will be managed by eBay, features items from some of the world’s biggest stars, including Coldplay, Norah Jones, Katy Perry, Gorillaz, Iron Maiden, the Beach Boys, David Guetta, The Chemical Brothers, Daft Punk, The Beatles and more.

All funds raised will be used towards the Japanese Red Cross disaster relief efforts to help those affected by the earthquake and tsunami. EMI Group has committed to match all funds raised from the auction up to a maximum of one million euros.

To bid on a special Birds of Tokyo blockmounted poster signed by the band, head HERE

Further items can be viewed HERE

The charity auction will also include a 1987 Ferrari 412 as featured in Daft Punk’s film ‘Electroma’, Katy Perry’s cupcake trampoline from her current California Dreams world tour, a limited edition Beatles’ ‘Yellow Submarine Schwinn bicycle, a signed guitar from Norah Jones, a limited edition Gorillaz lithograph signed by Jamie Hewlett and Damon Albarn and much much more. 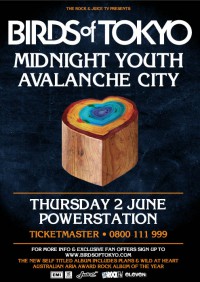 They’re about to have their first ever Gold certified single in New Zealand with their single ‘Plans’. Now Birds of Tokyo have announced they will be heading back to Auckland to perform a special one-off show at the Powerstation on Thursday 2nd June proudly presented by The Rock.

Birds of Tokyo will be supported by two of New Zealand’s finest acts … platinum selling Midnight Youth who have gained a reputation as a top-performing festival act, alongside current chart toppers Avalanche City making it a jammed packed rock show.

Tickets will go on sale from 9am Monday 18 April and are available from www.ticketmaster.co.nz

Earlier this year, Birds of Tokyo played a handful of sold out shows in Auckland and Wellington alongside the band’s blistering Big Day Out Auckland. Lead singer Ian Kenny expressed “It’s always amazing to be able to visit another country (albeit I often think of NZ as the relatives across the road!) and receive such a huge positive response from both old and newer fans who dig our music. We just want to keep coming back and playing shows.”

Birds of Tokyo’s award winning single ‘Plans’ has sold over 100,000 copies in Australia. It was also quickly embraced locally becoming a Top 10 airplay hit in the country and the song will officially hit Gold status this week in New Zealand.

Proudly presented by The Rock

TICKETS ON SALE FROM 9AM MONDAY 18 APRIL

MasterCard is excited to kick off the Debit MasterCard Priceless Music series for 2011 with another truly Priceless experience with West Australia’s own, Birds of Tokyo, set to take the lead to perform against an unforgettable backdrop on Sydney Harbour’s Cockatoo Island on Friday, 27 May.

The 2010 Debit MasterCard Priceless Music Series shows, which featured heavy-weights Pendulum, Katy Perry and Good Charlotte, were some of the most talked about gigs on the music calendar and 2011 is shaping up to be another stellar year!

Birds of Tokyo’s profile has been steadily on the rise since their formation in 2004, but 2010 was definitely the year of the Birds with their popularity soaring to new heights off the back of their self-titled, third studio album, which spawned the massive hits The Saddest Thing I Know, Plans and Wild At Heart. These three singles all made it into this year’s Triple J Hottest 100 with Plans shooting high into the No. 4 spot. Critical acclaim also met the band in 2010, with a massive six ARIA Award nominations resulting in the boys walking away with the Award for Best Rock Album. 2011 has kicked off in similar style with the band having two songs shortlisted for APRA’s Song of the Year and their new single, Circles, currently picking up radio adds around the country.

Last year’s success is on track to continue internationally for Birds of Tokyo in 2011, with the buzz from Australia rapidly reaching the US, resulting in the upcoming global release of the Birds of Tokyo album on iTunes, a US label deal in the works and an appearance at the Canadian Music Festival. Suffice to say, the Perth quartet are one hot commodity, which is why they are the perfect band to kick start the 2011 Debit MasterCard Priceless Music Series.

Tickets to the exclusive gig (including return ferry fare), to be held at Cockatoo Island will be extremely limited and will go on sale on Wednesday 4 May at 9.00am AEST. Tickets can be purchased at www.mastercard.com.au/music with a Debit MasterCard only.

How to Get Your Ticket and Access to Priceless Music Experiences

To catch Birds of Tokyo in concert for their Debit MasterCard Priceless Music Series show at Cockatoo Island on Friday, 27 May, 2011, visit www.mastercard.com.au/music and pre-register for an alert before Thursday, 28 April. Tickets, inclusive of return ferry fare, are priced at $40.00 (limit 4 per person) and will be available from 9.00am AEST on Wednesday 4 May. Tickets must be purchased with a Debit MasterCard. To get hold of a Debit MasterCard contact Commonwealth Bank, Westpac, Bankwest or Bendigo Bank and apply for access to future Priceless Music experiences.